Whenever I go to a city, my cultural exploration always revolves around food, and recently I got to indulge that passion in San Francisco. There’s always a theme when my besties and I go out and about in this wonderful city (this time it revolved around SF Beer Week), but a continually underlying theme is also “old school” spots, especially those on the SF Heritage Legacy Bars & Restaurants list. This trip I got to visit a couple on that list, plus check off a couple more places I’ve been wanting to try for a while. Here’s a rundown!

Finally got to Swan Oyster Depot (a Legacy spot, founded in 1912), a tiny, tiny, 12-seat tiny spot on Polk Street on Nob Hill. It’s really just a countertop, and most days the line will snake out the door and down the block. We lucked out and only had to wait a few minutes – a minor miracle. Once you slide into your seat, you take a gander at the myriad menu boards on the wall and go from there. One of several guys will take your order—it’s a very casual operation—and when you’re though, you tell them what you had, they write it down on a napkin and tell you what you owe. We opted for some Kumamoto oysters, a cuppa chowder, bay shrimp cocktail and Anchor Steams. Yummy! Next time, going for the roasted crab. 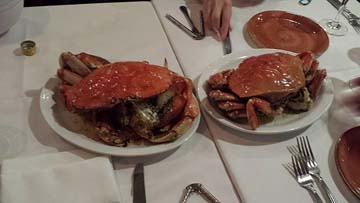 Speaking of crab … two words … Thanh Long. Also a Legacy spot, it was founded in 1971 and is considered the first Vietnamese restaurant in the city. There are no doubt plenty of tasty things to order on this menu, but we went straight for the roasted crab with garlic noodles, and did almost everybody else. You’ve gotta love a restaurant where most of the diners are wearing bibs and furiously licking their fingers. The crabs were roasted in butter, garlic, and secret spices, and were the biggest and meatiest I’ve ever seen. Yes, there was a lot of garlic going on … suffice it to say we were all safe from vampires that evening!

The Rebel Within is a savory muffin. Let me rephrase that … The Rebel Within is a savory muffin WITH A SOFT BOILED EGG IN IT! I’ve been eyeing this little gem from Craftsman & Wolves in the Mission for quite some time, but rarely get over to that part of town early enough. The bakery staff (whose baker/owner, William Werner, was just nominated for a James Beard Foundation Award) only makes 75 on weekdays and 140 on weekends, and once I found out how they make it, I can see why. I did finally prevail, however, and it was worth it, especially because the muffin batter also has crème fraiche, asiago, parmesan, scallions and sausage in it, and they give you a little vial of Tabasco salt to sprinkle on it! Oh, and the gougère was pretty darn yummy too. 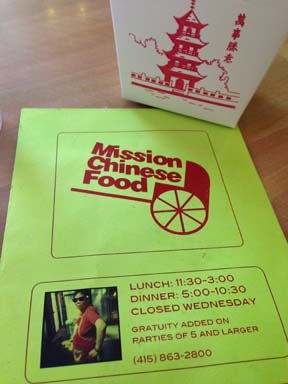 If you didn’t know about Mission Chinese, you would scurry right past it. It’s located at what seems to be a rundown restaurant with a dingy yellow marquee that reads “Lung Shan Restaurant” on it. Chef/ower Danny Bowien (a twice nominated and once winner of a JBF “Rising Star Chef Award) has created an intriguing menu with such dishes as pork dumplings with pea tendrils, chicken wings with beef tripe, and hangar steak chow mein. We went for the beer-brined pickled Chinese cabbage with peanuts and the stir-fried pork jowl with radishes that still had their greens attached.

And to “tap” it all off … one of my favorite breweries!

One thought on “San Francisco Treats” 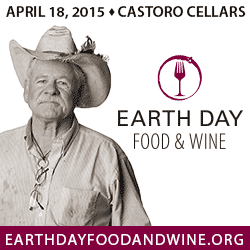